The RNA world concept is one of the most fundamental pillars of the origin of life theory. It predicts that life evolved from increasingly complex self-replicating RNA molecules. The question of how this RNA world then advanced to the next stage, in which proteins became the catalysts of life and RNA reduced its function predominantly to information storage, is one of the most mysterious chicken-and-egg conundrums in evolution. Here we show that non-canonical RNA bases, which are found today in transfer and ribosomal RNAs, and which are considered to be relics of the RNA world, are able to establish peptide synthesis directly on RNA. The discovered chemistry creates complex peptide-decorated RNA chimeric molecules, which suggests the early existence of an RNA–peptide world from which ribosomal peptide synthesismay have emerged. The ability to grow peptides on RNA with the help of non-canonical vestige nucleosides offers the possibility of an early co-evolution of covalently connected RNAs and peptides, which then could have dissociated at a higher level of sophistication to create the dualistic nucleic acid–protein world that is the hallmark of all life on Earth. To read the full paper click here. 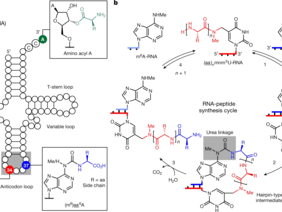