New research from Khobta lab reports position-dependent effects of a widespread oxidative DNA lesion 8-oxoguanine on the activity of a GC-rich gene regulatory element and describes the underlying mechanisms. Using reporter constructs containing synthetic 8-oxodG at four highly conserved G:C base pairs in the upstream regulatory element GC box, the researchers found an immediate impairment of transcriptional activation by the lesion at three of the investigated prositions. Subsequent activation and/or repression of the gene transcription was defined by the base excision repair components OGG1 and APE1 in a manner strongly dependent on the position of the lesion. The results thus establish a link between guanine oxidation, base excision repair and the GC box function. Read the full paper here. 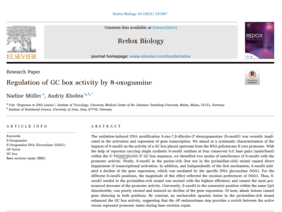