The research group lead by Professor Helle Ulrich at the Institute of Molecular Biology (IMB) in Mainz, Germany has made a breakthrough discovery in how cells repair damaged DNA during replication. In an article published in Molecular Cell, they show that damaged DNA is repaired in specialised areas of the nucleus, which they named ‘postreplicative repair territories’, or PORTs.

DNA is frequently exposed to damaging agents that chemically modify its bases, creating DNA lesions. Scientists had assumed that these lesions are repaired in DNA repair centres at the periphery of the cell nucleus. However, it was unclear how cells coordinated this repair with DNA replication.

In their latest study, Prof. Ulrich and her colleagues investigated how and where DNA lesions are repaired during replication by labelling Replication Protein A (RPA), a protein which binds to DNA that is actively undergoing repair, with a fluorescent marker. They then monitored the fluorescent RPA signal in dividing yeast cells treated with a drug that induces DNA lesions. Surprisingly, they found that DNA lesions are repaired in defined areas within the nucleus, rather than at the nuclear periphery, and only after the DNA had been replicated. Prof. Ulrich and her team named these repair regions ‘postreplicative repair territories’, or PORTs.

This finding shows that cells keep their DNA repair machinery well away from replication machinery and advances our understanding of how cells cope with damaged DNA during replication. Understanding how DNA lesions are repaired could also provide a mechanistic basis on which new anti-cancer drug therapies could be designed in the future. 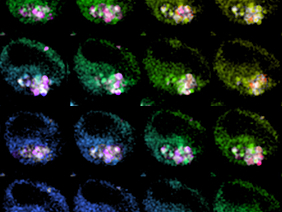